The English taste of the Empress

Our exhibition The English taste of the Empress: the Tsarskoe Selo of Catherine the Great in the Zubov Wing of the Catherine Palace celebrates 290 years since Catherine’s birth by showcasing rare English 18th-century prints from the Tsarskoe Selo collection and pieces of the famous Frog Service from the State Hermitage.

During her 34 years on the throne, Catherine spent much time at Tsarskoe Selo and led it to bloom. She played a part in each architectural project here, often as a co-author as well as the customer. Catherine’s personality, as well as her Anglomania, is seen in her every deed at Tsarskoe Selo.

Catherine never traveled to England but was very fond of its then-fashionable architecture and landscape gardens. She gathered 18th-century engravings of English cities and estates like Stowe, Kew, Chiswick, Richmond, Wilton and Hall Barn, of which nearly 100 prints are now at Tsarskoe Selo. The Marble or Palladian Bridge and the Arsenal seem to have come to our parks right from those engravings.

The 944-piece porcelain Green Frog Service was commissioned from the English pottery company of Josiah Wedgwood and finished in 1774. Embellished with views of 1222 English gothic structures and landscape gardens, the set was meant to demonstrate Catherine’s personal taste and enlightenment.

The exhibition honours the landscape and other architects who helped put the empress’ ideas to life: Charles Cameron, the Neyelov family, Joseph Bush, and John Bush whose portrait with his spouse Ann from a U.K. private collection is reproduced in the exhibition catalog.

Also on display demonstrating Catherine’s English taste are some furnishings and a two-seater carriage for children, a late 18th-century scaled-down Phaeton from London which was used by Catherine’s grandkids. 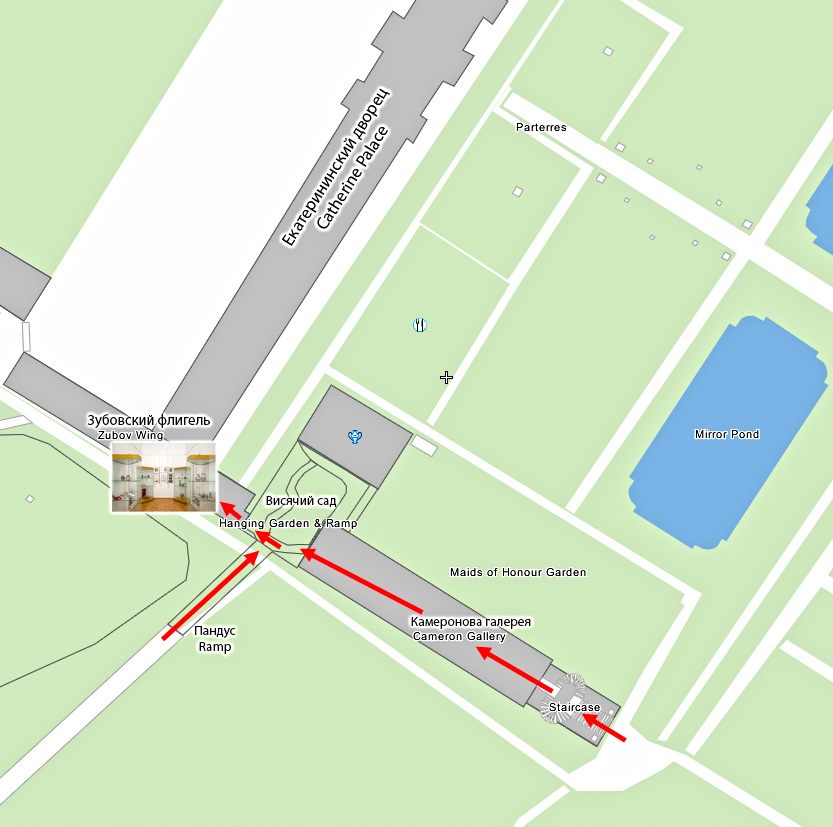